AirSign provides extensive aerial advertising coverage throughout all areas of Delaware. From beach aerial advertising to sporting events and over busy highways, we'll display your message to crowds in a way your audience will be certain to remember. 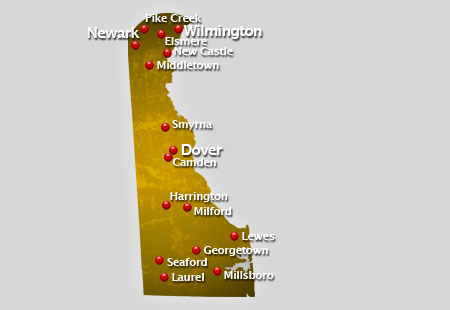 The state of Delaware is the second smallest state in all the United States, second only to Rhode Island. It has a total land area of 1,954 square miles. There are three counties that Delaware is divided into, New Castle, Kent County and Sussex. Topographically, the state of Delaware is a flat plain, with very low elevation compared to other states in the US. Summers in the state are hot and humid in all areas. However, the northern portion of the state has a shorter growing season of vegetation and the southern portion of the state has milder climate compared to the north.

The Delaware Memorial Bridge is considered to be the second longest twin span suspension bridge in the world. Another well-known landmark is the Grand Opera House otherwise known as Masonic Hall and Grand Theater, a 1,208-seat theater for entertainment. Historically, it was run by the Warner Brothers for most of the twentieth century as a movie theater from 1930 to 1967.

There are about 9 universities in Delaware including the University of Delaware, Delaware College of Art and Design and the Wilmington University. Among these universities, minor sports leagues are created such as the Wilmington Blue Rocks of the Minor Baseball League and the Delaware Griffins of the Women Professional Football League. Though the state has no major professional sports league teams, people of Delaware gives their support to either teams in Philadelphia or Baltimore.

Some Delaware cities that we service:

Crowds are an aerial advertiser's paradise! A typical flight over popular events or locations can result in as many as 8,000,000 impressions! Have us fly your aerial banner over the crowds in Delaware to put your message wherever you want, whenever you wish at the best value in mass marketing!

Cities We Serve In Delaware: