AirSign provides extensive aerial advertising coverage throughout all areas of Iowa. From beach aerial advertising to sporting events and over busy highways, we'll display your message to crowds in a way your audience will be certain to remember. 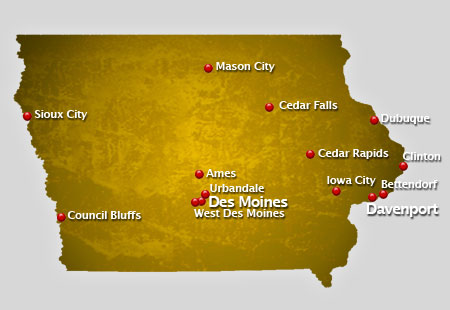 Iowa has a humid continental climate having hot and humid summers and very cold winters with periodic snowfalls. It is bordered by three riversides namely the Mississippi River, the Missouri River and the Big Sioux River. Typically way back, Iowa is prairie with high grasslands and wildflowers around. Though there are a lot of inhabitants, preserved prairie lands are still established in the land, giving the state a greener view.

Few of the landmarks found in Iowa are the Amana Colonies, a place of 7 unique German villages inhabited 150 years ago, the Old Iowa City Capitol and the Herbert Hoover National Historic Site.

There are three public universities in the state of Iowa. These universities are the Iowa State University in Ames, University of Iowa found in Iowa city and University of Northern Iowa in Cedar Falls. A multiple of universities and colleges are also located in the state of Iowa. Included also are private liberal arts colleges and special schools such as the Iowa School for the Deaf in Council Buffs and Iowa Braille and Sight Savings School in Vinton. In sports, Iowa has sports league teams in 5 sports division. In Baseball, the Sioux City Explorers are included in the American Association of Independent Professional Baseball. Teams like the Quad City Mallards are hockey teams and Sioux City Bandits are indoor football team. Other sports are basketball and soccer with teams like Iowa Energy and Des Moines Menace respectively.

Some of the cities in Iowa that we service:

Crowds are an aerial advertiser's paradise! A typical flight over popular events or locations can result in as many as 8,000,000 impressions! Have us fly your aerial banner over the crowds in Iowa to put your message wherever you want, whenever you wish at the best value in mass marketing!

Cities We Serve In Iowa: