AirSign provides extensive aerial advertising coverage throughout all areas of Michigan. From beach aerial advertising to sporting events and over busy highways, we'll display your message to crowds in a way your audience will be certain to remember. 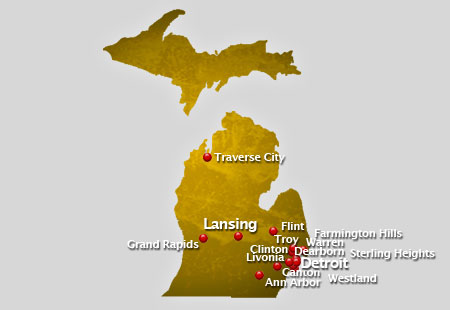 A number of private and public colleges and universities exist in Michigan as well as community colleges and technical schools. Some of these institutions of learnings are the University of Phoenix, University of Michigan System, with campuses in Ann Arbor, Dearborn and Flint, and the Oakland University. Examples of community colleges and technical schools are American College of Computer and Information Sciences, ITT Technical Institute and Oakland Community College. In sports, many sports league teams, both in major and minor league, exists in the state of Michigan. Few of these sports league teams are Grand Rapids Rampage of the Arena Football League, West Michigan Blizzard of the All American Hockey League and Flint Generals of the International Hockey League.

The state of Michigan is divided into two peninsulas, the lower peninsula and the upper peninsula. The two peninsulas are separated by the the Straits of Mackinac. A bridge was built to connect these two peninsulas in 1957 which has quickened the development of the upper peninsula. Climate in Michigan is amiably cool summer and snowy cold winters. Most tourists are attracted with the snow-covered hills in Michigan, ideally for skiing. Some of the well-known landmarks of Michigan are the Henry Ford Museum and the Greenfield Village, both located in Dearborn, the Pictured Rocks and Sleeping Bear Dunes, National Lakeshores and the Isle Royal National Park.

Some of the cities in Michigan that we service:

Crowds are an aerial advertiser's paradise! A typical flight over popular events or locations can result in as many as 8,000,000 impressions! Have us fly your aerial banner over the crowds in Michigan to put your message wherever you want, whenever you wish at the best value in mass marketing!

Cities We Serve In Michigan: