AirSign provides extensive aerial advertising coverage throughout all areas of Nebraska. From beach aerial advertising to sporting events and over busy highways, we'll display your message to crowds in a way your audience will be certain to remember. 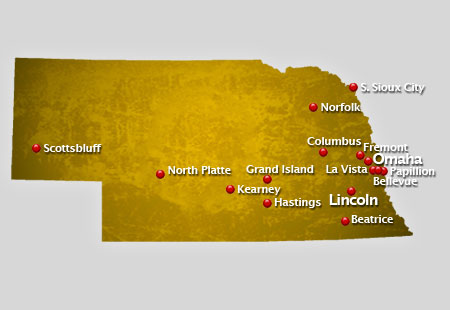 Nebraska became the 37th state of America in the year 1867. By that time, Civil War was over and shortly after the assassination of President Abraham Lincon, the state capital of Nebraska changed from Omaha to Lancaster, eventually named Lincon after the late president. Geographically, Nebraska is divided into two land regions, the Dissected Till Plains and the Great Plains. The Dissected Till Plains covers the eastern part of the state and has a climate of humid continental. Summers in the east are humid and warm with occasional thunderstorm and winters are cold and has occasional snowfall. The Great Plains, on the other hand, covers the western part of the state. It has a semi- arid continental climate or low annual rainfall.

Some of the cities in Nebraska that we service:

Crowds are an aerial advertiser's paradise! A typical flight over popular events or locations can result in as many as 8,000,000 impressions! Have us fly your aerial banner over the crowds in Nebraska to put your message wherever you want, whenever you wish at the best value in mass marketing!

Cities We Serve In Nebraska: