AirSign provides extensive aerial advertising coverage throughout all areas of Oklahoma. From beach aerial advertising to sporting events and over busy highways, we'll display your message to crowds in a way your audience will be certain to remember. 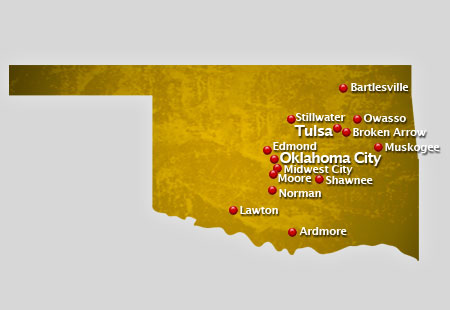 The state of Oklahoma has a total land area 69,898 square miles, with 68,667 square miles of land and 1,231 square miles of water. It is considered the 20th state of America and are bordered by the states of Kansas in the north, New Mexico in the far west, Texas in the south and near west, Arkansas and Missouri in the east and Colorado in the northwest.

Oklahoma has one of the highest rank in tornado hits all over the world with an average of 54 tornadoes yearly since most of the state are located in the Tornado Alley. Severe weather usually are experienced in the state of Oklahoma typically a continental climate. In the eastern part of the state, it has a humid subtropical climate but eventually becoming a semi-arid climate.

Major attractions in the state of Oklahoma are the National Cowboy Hall of Fame in Oklahoma City, the Cherokee Cultural Center that has some restored old Cherokee villages, the Lake Texoma recreation area, Blue Ribbon Downs in Sallisaw and the Fort Gibson Stockade in Muskogee.

Some Oklahoma cities that we service:

Crowds are an aerial advertiser's paradise! A typical flight over popular events or locations can result in as many as 8,000,000 impressions! Have us fly your aerial banner over the crowds in Oklahoma to put your message wherever you want, whenever you wish at the best value in mass marketing!

Cities We Serve In Oklahoma: