AirSign provides extensive aerial advertising coverage throughout all areas of Virginia. From beach aerial advertising to sporting events and over busy highways, we'll display your message to crowds in a way your audience will be certain to remember. 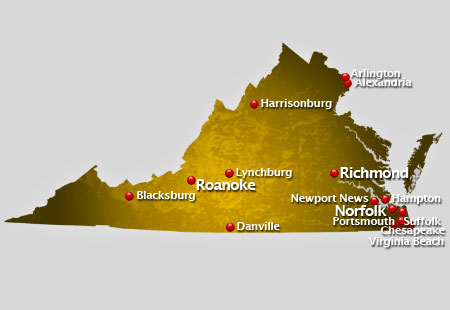 The so-called Mother State is always proud to mention they are among those who were first to be colonized. This is evident through the stories of Jamestown colony which was popularly depicted in the story of Pocahontas and John Smith.

Eight US presidents have been born in this state that is rich in natural resources which are found in Chesapeake Bay and the Blue Ridge Mountains.

A humid subtropical climate mostly envelopes Virginia, however, in the mountainous regions of the state, the climate becomes subtropical highland. Hurricanes are mostly rampant, as well as thunderstorms and tornadoes, and have caused destruction in some communities.

James Madison Montpelier has been a very popular landmark that attracts a lot of visitors yearly. The Virginia beach also exhibits a fair share of visitors with its 3 mile concrete oceanfront boardwalk where you can enjoy live music and street parties all around.

The US Department of Education National Assessment of Educational Progress have attested that Virginia has been consistently one of the top ten in the ranks of the educational system in the country. Schools practice the K-12 systems for public schools and there are also special and alternative centers in 134 school divisions. The more popular schools in the state would be the University of Virginia, Thomas Jefferson High School for Science and Technology and James Madison University.

Some Virginia cities that we service:

Crowds are an aerial advertiser's paradise! A typical flight over popular events or locations can result in as many as 8,000,000 impressions! Have us fly your aerial banner over the crowds in Virginia to put your message wherever you want, whenever you wish at the best value in mass marketing!

Cities We Serve In Virginia:

AlexandriaArlingtonBlacksburgChesapeakeDanvilleHamptonHarrisonburgLynchburgNewport NewsNorfolkPortsmouthRichmondRoanokeSuffolkVirginia Beach
Get in touch with us today.  Contact Us