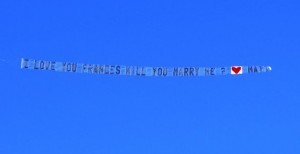 When people hear of AirSign Aerial Advertising, they usually think that we just fly big banners for companies. Well, they would be correct to assume that because a lot of our work comes from companies who hire us to advertise for them. We also have another side of the business that is often used as well. Recently my boyfriend proposed to me. Traditionally the guy takes the girl out to a nice restaurant and somewhere along the way, during the evening, he gets down on one knee and asked the girl to marry him. That is sweet and all, but it’s traditional. There are many of us people out there; though, that like things done “out of the box” or in a unique way. When a guy proposes to his girlfriend, it’s a very special time, but there are ways to make it even more special. My boyfriend did the traditional thing of getting down on one knee and asking me to marry him, but he also did something completely different and special. He had AirSign Aerial Advertising fly a banner for him asking me, Frances, to marry him. When I saw this, I was totally surprised and felt so special that I had a banner flown that was just for me.

Now as your reading this, you yourself maybe thinking of getting engaged or maybe you know someone that is soon to propose. Here is a way to do it that will impress your girlfriend beyond words! I speak from experience when I say that the Aerial Letter Banner makes the day even more perfect and special than it already is.

AirSign Aerial Advertising has had 100% success with Marriage Proposal Banners. We get calls or text messages from the fiance’s all excited that the girl said “Yes” and that the banner looked awesome. AirSign Aerial Adverting is not only here to serve the Business Community, but all people, all over this great Nation.