One of the craziest things to wrap your head around and perhaps one of the most romantic things ever accomplished by mankind is our ability to fly. The capability to soar above Earth and transport ourselves from city to city, state to state and country to country in just a matter of hours (even minutes) never ceases to amaze.

We are taking the awe of flight to a different level tonight and will kick off the universal celebration of Pi Day in the skies over Austin, TX, at SWSX at 6:28 p.m. CDT. Originally our plan was to execute the event tomorrow, but Mother Nature’s forecast forced our hand. We chose 6 :28 because it’s pi times two, a number some believe is the truer reflection of the power of the circle.

We partnered with artist ISHKY, who specializes in grand-scale projects. ISHKY’s “Pi In The Sky” explores the boundaries of scale, public space, permanence, and the relationship between Earth and the physical universe. Our team of five synchronized aircraft equipped with dot-matrix skywriting technology follows a flight pattern that forms the first few hundred characters of pi’s infinite sequence at SXSW. Each number will measure more than a quarter-mile in height. 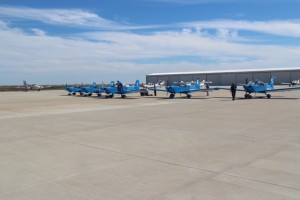 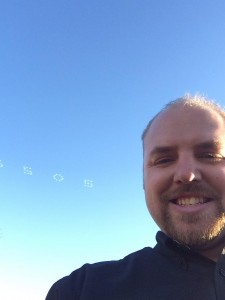 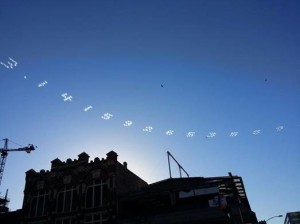 And here’s some early reaction:

Seeing the pi in the sky above my house super cool!!! @AirSignUsa