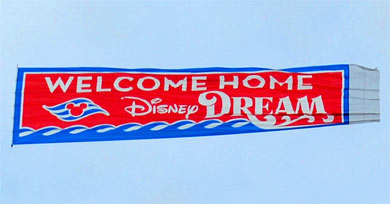 About the Walt Disney Company and the Disney Dream

When it comes to a Disney event, nothing less than spectacular will do, and the arrival of the new Disney Dream cruise ship to Port Canaveral, Fl. was no exception. AirSign worked alongside the Disney team to aid in making the arrival ceremony, christening, and maiden voyage events around the Disney Dream launch worth remembering for years to come.

AirSign supplied banner planes, custom banner printing, and sky writing services for Disney’s events as the Disney Dream made her debut. AirSign pilots worked within a tight schedule, with very specific flight paths over various key locations around Port Canaveral based upon requirements dictated by the nearby U.S. Air Force base and U.S. Coast Guard offices.

Along the way, AirSign communicated directly and frequently with the Disney team to ensure the event went as planned and brought about the desired results.

...you delivered an exceptional series of shows that exceeded our expectations... The addition of the flights you coordinated were part of the over-the-top experience that our guests have come to expect from a Disney event, and for that, you should take a great deal of pride.
A Disney Project Manager