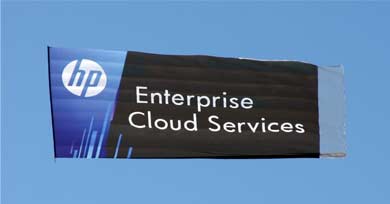 In 2011, Hewlett Packard wanted to target fans in Dallas for Super Bowl 45 with news of their Enterprise Cloud Services launch. The innovative IT-giant wanted to surprise football fans and get their attention with a message that would inspire curiosity and create a social media buzz without purchasing the more traditional and expensive Super Bowl television ad.

Hewlett Packard contacted AirSign and strategized a method to reach over 100,000 football fans at the Super Bowl Experience and on game day with a giant aerial banner pulled by a single engine airplane.

Hewlett Packard was able to reach thousands of consumers with their aerial banner twice during the Super Bowl festivities in 2011.

This has been such an exciting experience working with the AirSign team, that our entire company and the business community we work with is a buzz with this Super Bowl promotion.
- Hewlett Packard executive