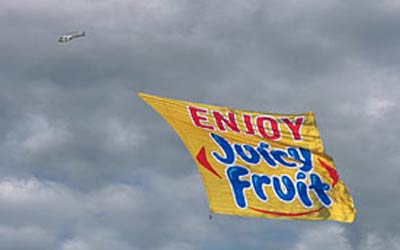 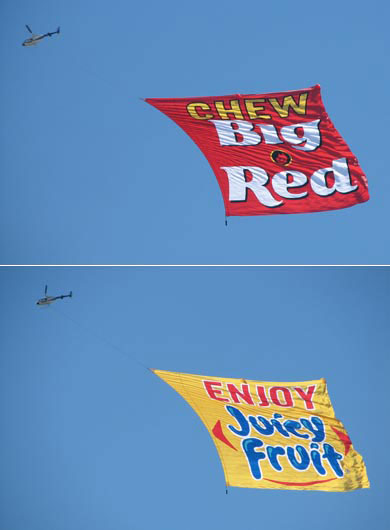 With operations in approximately 50 countries and distribution in more than 180 countries, Wrigley’s brands bring smiles to faces around the globe. The company is headquartered in Chicago, Ill., and operates as a subsidiary of Mars, Incorporated.

Wrigley’s marketing team was looking for a creative and out-of-the-box way to market and create national buzz around their brands Juicy Fruit and Big Red. It was important for the campaign to represent the same high standard of quality that Wrigley has portrayed over the past 100 years.

Working closely with the AirSign team and its subsidiaries, Wrigley chose to target the NASCAR Racing Series with its campaign. NASCAR gave Wrigley the opportunity to target hundreds of thousands of fans in regional locations across the United States, from Los Angeles to Miami.

With AirSign’s massive Heli-banner™, Wrigley exceeded their expectations in creating massive branding and exposure for their products, leaving NASCAR fans buzzing about the huge Wrigley banners circling the sky above them.