AirSign provides extensive aerial advertising coverage throughout all areas of Georgia. From beach aerial advertising to sporting events and over busy highways, we'll display your message to crowds in a way your audience will be certain to remember. 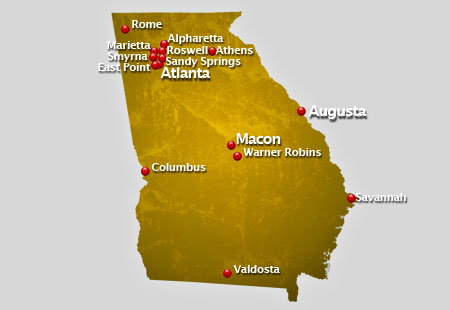 Known as the Empire State of the South, this 59,425 square mile state is the largest east of the Mississippi River in land area and fourth largest in total area. The state of Georgia has a numerous variety of flora and fauna. It has approximately 250 species of trees, 160 birds, 79 reptiles and 63 amphibians. Climate in Georgia is hot and humid in summers and cool in winter, ideally a subtropical climate for nature inhabitants.

Close to nature is the popular Stone Mountain Park in Atlanta, Georgia where families can enjoy a variety of activities involving natures beauty. Also found is the Confederate Civil War Memorial where the faces of Jefferson Davis, Robert E Lee and Stonewall Jackson are engraved in a big granite stone. Another breathtaking view in Georgia is the Georgia State Capitol in Atlanta with its unique golden dome, architecturally designed in resemblance to the United States Capitol in Washington D.C. It has also been marked as a National Historic Landmark.

There are about 70 public universities and colleges in Georgia and approximately 45 private institutions. These places of learning produce great sportsmen creating teams in eight major professional sports league. Some of these sports leagues are teams in the National Basketball Association, National Hocky League and National Football League.

Some Georgia cities that we service:

Crowds are an aerial advertiser's paradise! A typical flight over popular events or locations can result in as many as 8,000,000 impressions! Have us fly your aerial banner over the crowds in Georgia to put your message wherever you want, whenever you wish at the best value in mass marketing!

I just want to say what a great day we had. Everyone loved the plane banner! I received so many calls - I gave your number to many. Thanks again!

Cities We Serve In Georgia: