Cisco is one of the leading manufacturers of network equipment. Cisco's primary business is in internetworking products, such as routers, bridges, and switches. They were founded in December 1984 by Leonard Bosack, who was in charge of the Stanford University computer science department's computers, Sandy Lerner, who managed the Graduate School of Business' computers, and Richard Troiano.

A competitor of CISCO had a previous campaign involving a crop circle at the CES show in 2014 that was very well received. Cisco needed to top that. They wanted to do a product announcement that would be remembered above all others. They needed that edge. Cisco reached out to AirSign for the solution. Instead of the ground being used for their campaign, they chose the sky.

At the Consumer Electronics Show (CES), the Cisco Service Provider Marketing team leveraged an integrated skywriting and social media campaign to figuratively and physically bring the message to the cloud to tie what Cisco was doing on the show floor. 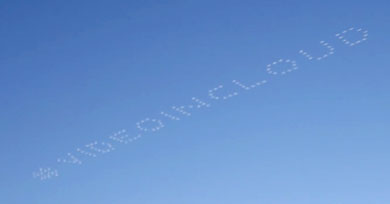 Since this is the largest consumer electronics show in the world and being held in Las Vegas, 5 planes in unison spelling out their new product would get the attention they wanted. Overall, the campaign was a success with 3.2M impressions. They were so pleased that they immediately booked for the CES event in 2016 and began working on another campaign with AirSign to be held in the future over Barcelona, Spain.