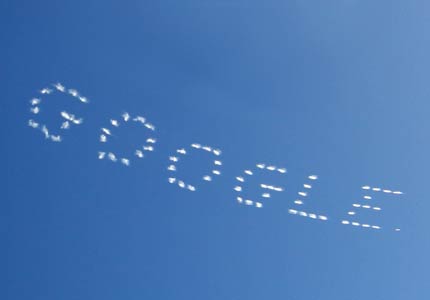 Google’s mission is to organize the world’s information and make it universally accessible and useful. Headquartered outside of San Francisco in Mountain View, CA, Google specializes in Internet-related services and products.

When Virgin America decided they were going to migrate to a Google platform, the Internet giant wanted to show their support and bring the whole city of San Francisco into the celebration. After strategizing with the team at AirSign, Google chose to light up the sky over San Francisco with AirSign’s attention-grabbing digital skywriting with five planes working simultaneously in the sky.

The digital skywriting message stretched across the horizon, over the entire iconic San Francisco skyline. Social media in the bay area went crazy with photos and tweets non-stop spreading the message around the world.

Not only was Google able to share news of Virgin America “going Google” and congratulate the company in a very public way, but the unique sentiment was seen by millions and shared by thousands via text message and social media causing onlookers and their connections to utilize Google and social media channels such as Twitter in an effort to learn more about the announcement.