And produce the WOW factor your audience will never forget.

Bad news for motorists is great news for advertisers!

Banner towing is no longer just about planes over beaches in Summer! Aerial advertising has become a powerful, year-round marketing tool!

The news is filled with reports about how gridlock on America's streets and highways is bad and getting worse. Motorists are being forced to drive more slowly during commutes that are covering ever longer distances. These "slow and go" driving conditions are giving more motorists more time to look at signs.

Traffic congestion is creating a billboard advertiser's paradise! But billboards in prime locations are few in number and hugely expensive - unless you rent an aerial banner using aerial advertising to put your message wherever you want, whenever you wish! 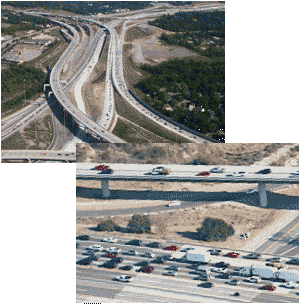 A recent U.S. News & World Report cover story has a sub-headline which reads in part:
"Tie-ups. Backups. Gridlock. The American commute has never been so painful."

The status of the City of Angels as a commuting hell is nothing new. But by 2030, according to some estimates, driving in Atlanta, Minneapolis, and nine other urban areas will be worse than present-day Los Angeles. Nationwide, more and more people will see their roads clogged for longer periods of time.

..More people are on the roads, and traffic has grown dramatically worse. Americans spent 3.7 billion hours in traffic in 2003, the last year for which such figures are available - more than a fivefold increase from just 21 years earlier. The amount of free-flowing travel is less than half what it was in the '80s and the average commuter now loses 47 hours to congested traffic every year.

America has about 70 million more people than it did a quarter century ago, but highway miles have increased by a little more than 5 percent in that time. The Department of Transportation estimates that the demand for ground transportation ... will be 2.5 times as great by 2050, while highway capacity is projected to increase by only 10 percent during that time.

The economy has driven car ownership to new heights; the average household now has slightly more cars, 1.9, than drivers, 1.8. Property values and restrictive zoning in many areas have made finding quality housing near one's workplace virtually impossible for many, and the quest for affordable housing has sent people to ever more distant locales.

Nothing gets the attention of bored-out-of-their-gourd commuters like the sight of a huge airplane banner cruising slowly into view. 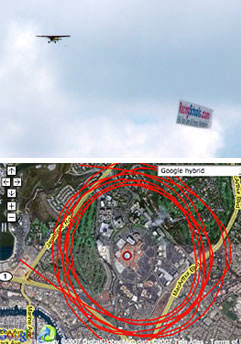 By circling directly over the busiest sections of the routes that are clogged, your message is clearly visible to the greatest numbers of your best potential customers. Stationary billboards quickly become part of the scenery but aerial banners turn virtually every head of every commuter in sight!

Curiosity makes these giant images irresistible! It will not be uncommon for one-hundred-thousand of the right sets of eyes to be on your logo and website URL every hour and at a cost per prime time view which you can't achieve with any other medium.

You only pay for what you use! Unlike stationary billboards which you pay for even when no one is around to look, airplane banners are "on the clock" only during rush hours! Aerial advertising lets you put the message you want exactly where you want it, exactly when you want it there.

Most retailers report making 90% of their income in the thirty days between Thanksgiving and Christmas. An aerial ad component to your total advertising mix can not only increase holiday revenue, it can also increase and more uniformly distribute your profits over the entire year!

Warning: mysqli_query() expects at least 2 parameters, 1 given in /home/airsig5/public_html/includes/location_functions.php on line 152

Warning: mysqli_fetch_array() expects parameter 1 to be mysqli_result, null given in /home/airsig5/public_html/includes/location_functions.php on line 154

Warning: mysqli_query() expects at least 2 parameters, 1 given in /home/airsig5/public_html/includes/location_functions.php on line 168

Warning: mysqli_error() expects exactly 1 parameter, 0 given in /home/airsig5/public_html/includes/location_functions.php on line 168